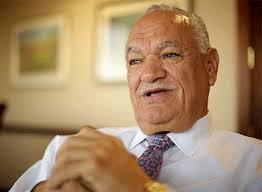 As Omar Boraie nears the completion of his latest project in New Brunswick, a deluxe luxury high rise residential on Somerset Street in the heart of the city called The Aspire, he's perhaps most happy about two things:

His vision for New Brunswick, one he saw four decades ago, is continuing to take shape;

People no longer think he's crazy for having it.

Omar, the warm-hearted 73-year-old president and patriarch of Boraie Development LLC, lets out a belly laugh as he recounts all the doubters he's faced since deciding it was his dream to help rebuild New Brunswick in the same manner he witnessed in Europe first hand when he was a traveling scholar of Chemistry from Egypt.

"When we started here in 1972, it was awful," he says. "You couldn't walk on the streets after 4 p.m. Everyone had left the city. But I thought, 'This is an area where we could do something.'"

Back then, New Brunswick looked nothing like what you see from the panoramic view Omar has from his 8th-floor office on Albany Street today.

In fact, the view didn't exist at all.

The building marked his first great project in town.

"There were 21 vacant and dilapidated buildings on this block," he says. "So I started buying one after another. When I was done, I went to the city and said, 'Here is the plan.'

In reality, he was ahead of his time.

The building, Albany Street Plaza Tower One, brought the city some much-needed Class A office space, 250,000 square feet, during the 1980s and 90s. Tower Two - located right next store - was complete in 2003, helping the city add even more businesses.

And, of course, a lot of non-believers.

"People thought my dad was nuts," says Wasseem Boraie, Omar's oldest son who serves as a vice president with the company and who jokingly repeats the family line.

Omar, of course, had the last laugh.

The building, which was complete in 2007, sold out in two months.

"Nobody believed we could do that," Omar says. ''

"Everyone was surprised we could build a building like Spring Street in New Brunswick. That was the beginning of when people started believing."

Don't be confused. Omar Boraie will be the first to tell you he is just one of the people who helped make New Brunswick's rebirth possible.

He is both proud and private. And quick to credit so many others for the city's renaissance.

But he's not the only one, Omar says, rattling off more names: There's John Lynch, John Heldrich, Mayor Cahill, Harvey Holzberg, David Crabiel; entities such as New Brunswick Tomorrow and the New Brunswick Development Corporation and the engine that is Rutgers University.

These people and these groups did so much, Omar says. They brought culture to the town in the form of three theatres. And had the vision to build a hotel (the Hyatt) when no one thought it was needed.

"Make sure you include all of their names," he says. "It's important to give the proper credit and they saw where the city could be going, too."

Where it's going now, Omar feels, is to places such as The Aspire, a Seventeen Story, 370,000 square-foot building with 238 residential units, 10,000 square feet of retail space and a four-story parking garage.

It is luxury accommodations that Omar feels will bring another segment of the population back in to the city.

"Professional people ... doctors ... people from university," he rattles off. "Our goal is to get more professionals. We want to get more people with money to spend downtown.

"We want to get good quality tenants, it’s what we’ve been doing the past 40 years."

These units, he says, are not only wanted by people but by the companies that employ them.

Wasseem is quick to agree.

"By creating world class residential products, employers can now say: Our employees can now live here. That’s a great plus. People don’t want to sit on 287 and the Parkway for two hours."

This ability will help New Brunswick continue to grow - and to do so as a vibrant community of young and old, business people and students, Wasseem says.

"We don’t just want student housing on every block," he says. "We don’t want this to turn into a Penn State campus. We want this to be a broader version of a bigger city.

"Bringing back some of the wealth into the town which will lead to young people saying, 'Hey, This is a beautiful area. I don't have to move to Hoboken or Jersey City or wherever. I can stay here.'

It's what Omar has been envisioning for four decades.

It's one of the reasons he keeps working as well as to build new projects like Albany Street Tower Three- a mixed-use building with 150,000 square feet of Office. Omar would like to see more quality commercial and office users in New Brunswick.

"I still enjoy working every day," he says. "I love what I’m doing and that’s very important. And I’m working with family."

In addition to Wasseem, his second son, Sam, and his daughter, Hiam, also play important roles with the company.

All of them are helping him see his vision through in sort of a daily reminder of his lifetime achievement award.

"This is my dream," he says, gazing out the window on a picture-perfect day. "My dream has come through the past 10 years. Every morning I look out and see Johnson & Johnson. I see Rutgers. I see the medical school. I see the hospital expanding.

"There is collaboration and cooperation between everyone. It’s really an unbelievable combination.

"It’s the combination that is building downtown New Brunswick."